Wow, it’s been a while since my last post, hasn’t it?

Early in July, I traveled to Albuquerque to attend the GCLS conference. When I returned, I had every intention of hopping on here soon afterward to tell you all about it.

What I didn’t anticipate was how long the pure shock of winning a Goldie Award would actually last. It’s been a month already, and I still keep thinking I’ll wake up and realize I dreamt it all.

I mean, I was just so amazed and grateful to be a Goldie finalist. I didn’t dare hope for more.

But…more on that in a moment.

Now that I’ve finally found my (typing) voice again, I wanted to share with you what it was like, going to my very first in-person literary conference! 💙

For anyone who isn’t familiar with it yet, the Golden Crown Literary Society is an organization that celebrates sapphic and women-loving-women literature. It’s a pretty awesome thing, and if you’re anything like me, a quick glance at the previous years’ awards (and especially the Trailblazer Award) will have you overwhelmed with gratitude for all of the brave lesbian/sapphic authors who paved the way in this type of fiction (long before most publishers were willing to touch us). 💙

(I’ve included a link to the GCLS website here, if you want to learn more.)

If you think you’ve heard of it but aren’t sure, you’ve likely heard of it because of the Goldies (annual literary awards) or the GCLS conference that takes place each year.

My first introduction to the organization was during the pandemic. So, I’d never been to an in-person conference before.

I’m neurodivergent, which (among other things) means I get overstimulated easily—especially in crowds. But if I’m being honest, that was the least of my problems.

What was I so afraid of? Well, that’s always the question with anxiety, isn’t it? I didn’t know what I was going fail at. I just knew I was going to fail.

But I was a finalist! 💙 And I’d been invited to participate in a panel! And on top of that, the thought of meeting people who love sapphic literature as much as I do sounded pretty amazing—if I could just conquer my fear of, you know, people.

Did my voice shake during my reading, like I was afraid it would? Yes. Definitely.

But the world didn’t end because of a quiver in my voice. No one laughed at me or hated me because of it. Everyone was actually unbelievably kind. 💙

Did I get so nervous about the panel that I left my name thingy at the other hotel? Yep!

But again, I survived.

Did I get a little more personal and emotional during one of the panel questions than I intended to? Yes.

But there were people who related to my story and appreciated it. 💙

To meet these wonderful people and to be so encouraged in my craft, it was worth every fear I faced. 💙

Most of you know…I live in Alabama. Very red, Bible-Belt Alabama. It took me a long time to come out.

Between the pandemic and my own anxiety, I’ve only been to one Pride since I came out.

Feeling safe to be who I am, being surrounded by people who are like me—these are feelings I don’t know well.

There were two nights—the first one was after my panel, and the second was after the Goldies. Both times, I just sat in my hotel room afterward and sobbed.

And just in case we thought I was done being super emotional, I’m crying again at the memory. 😅

Does that sound silly? Or is it something a lot of LGBTQ people experience? I don’t know.

I guess it’s the thing that drives so many of us toward the found family trope.

I know my experience was probably different from that of someone who’d grown up in a more inclusive area or came out earlier in life or just…wasn’t as shy.

But for me, it was something I’d never known I needed—but definitely had needed. 💙

Anyway, now that I’ve gotten ridiculously emotional on you, let me just jump over to the announcements with no transition whatsoever! 😅

Listen…the people who invited to sit at their table were so amazing and encouraging, and I just didn’t know how to tell anyone that there was no chance of me winning. 😅

So, when my name was called, I just…froze. I don’t know how long it took me to process the fact that I’d actually seen my book on the screen. Maybe it was half a second. Maybe it was thirty.

I just know it took me a moment.

A friend was texting me later that night and asked what I said during my thank you speech, and I said, “Honestly, all I remember is wandering up there and hyperventilating on the microphone.”

I’ve been assured by a few people, since then, that there were actual words that came out of my mouth, but I remain skeptical.

I know I wanted to thank my readers, friends, and GCLS, but whether those words actually made sense once they came out of mouth is a total mystery.

Seriously, though, I am so grateful for all of you. 💙

All I want is to bring people joy and show them they deserve happiness, no matter what, and without readers, I couldn’t do that.

Congratulations to all the other winners, too! 💙 You can see them all here! 💙

My second (belated) announcement (another casualty of my Month of Shock) is that Pirates of Aletharia was voted Best Sapphic Fantasy on I Heart SapphFic! 💙💙💙💙

And it’s in such awesome company, too! 💙

Congratulations to SD Simper and K. Aten, too!

You can see links to their books and other winners of the I Heart SapphFic Best of the Best polls here!

Thank you so much to everyone who voted for Pirates of Aletharia. It means the world to me that people are enjoying this book. 💙💙💙💙

Gosh, it’s just been an encouraging month, and I’m so grateful for it. 💙

And now, a picture of the award itself:

It’s shaped like a book! How cool is that! 💙

I’ll have a few more book updates in the newsletter that’s going out within the next couple of days, but until then, I just wanted to say thank you. 💙💙💙💙

Thank you all for reading! And for showing so much love to these lesbian pirates and their meddling ship cat! 💙

I feel like I could say thank you every day, and it still wouldn’t be enough. But hopefully, my periodic thank you’s reach you, at least. 💙

I love writing so much, and I’m grateful every day I get to do it.

You have no idea how many writer’s blocks and self-doubt spirals your support and kind words have pulled me through.

I appreciate you all more than I could ever say, and I can’t wait to share Em and Maria’s next adventure with you. 💙

Happy May! I hope you’ve all had a good start to the month! 💙

I’m so excited and honored to share that Pirates of Aletharia is a Goldie finalist in the Science Fiction and Fantasy category! 💙💙💙

I think I’ve checked like once a day to make sure it wasn’t a mistake. 😅

I loved writing this book so much, and I’m so grateful for every piece of good news I get to share about it! 💙

Congratulations to all of the other finalists! 💙💙💙

You can see them all here, on the GCLS website.

If you’re signed up for the newsletter, you should be getting one of those soon. 💙

I hope you all have an awesome weekend! 💙💙💙

Pirates of Aletharia has over four hundred Amazon ratings and reviews now! ❤️🧡💛💚💙💜

And it’s still hanging out on the Lesbian Romance, Lesbian Fiction, and LGBTQ Fantasy bestseller lists after four months. 💙

I am so amazed and so grateful these lesbian pirates are finding so many amazing readers. 💙 I appreciate you all more than I could ever say! 💙 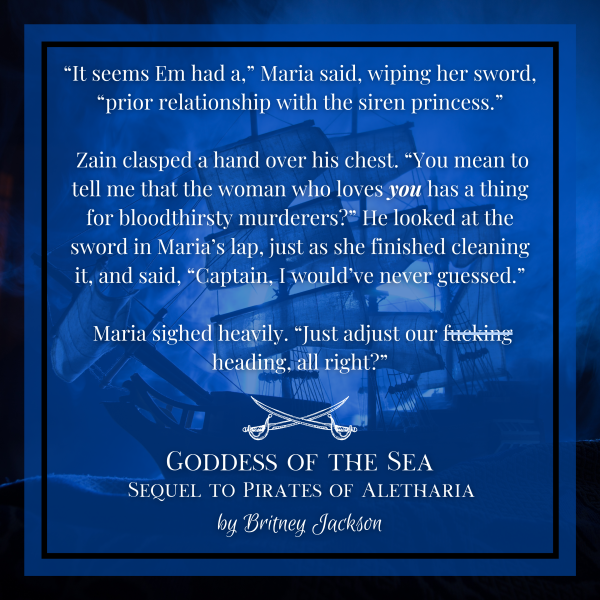 (And I’m already having to bleep Maria’s language. 😅)

Did you notice how Emilia’s graduated from Maria’s “fascination” to “the woman who loves her?” ✨Progress!✨

Maybe in fifty years, Zain will actually compliment her. 😅

Anyway, I hope you enjoyed this tiny snippet of Goddess of the Sea. I can’t wait to share more with you! 💙

And I hope you all have an awesome weekend! 💙 I hope you’re all having a wonderful month. 💙

I recently found out that Pirates of Aletharia won I Heart Lesfic’s Book of the Month Award in the Fantasy Romance category. 💙

Thank you so much to everyone who voted. I can’t tell you how grateful and happy I am that people are enjoying Em and Maria’s story. 💙

And I can’t wait to share their next story with you! 💙

You can see the other winners at this link: https://bit.ly/35zy01

And if you aren’t already subscribed to the I Heart Lesfic newsletter, I definitely recommend it! It’s one of my favorite newsletters to see in my inbox each week. 💙 I haven’t done a teaser day in ages. So, here’s Emilia being a hopeless lesbian over the woman who might murder her. (As one does.)

The first newsletter of the year will go out later this week! 💙

So, if you want to get that, and you haven’t had a chance to sign up yet, you can sign up here! 💙

Happy Teaser Day, and I hope you all have a wonderful weekend! 💙 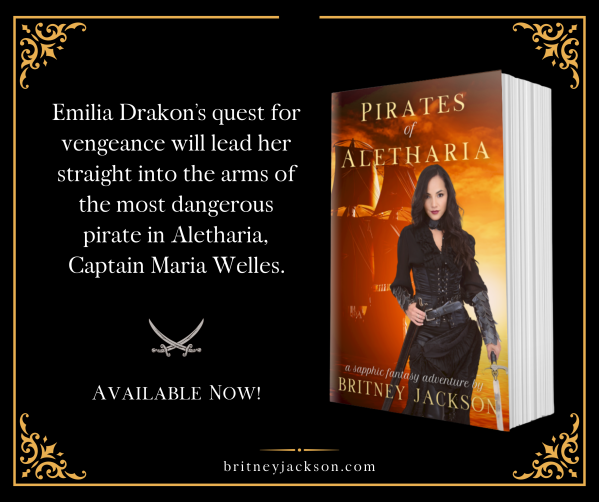 I’m wishing you all love and health this holiday, and if you, like me, find the holidays difficult, I’m sending a lot of extra love your way. ❤️💚❤️

Pirates of Aletharia is here! ❤️

I love these lesbian pirates so much, and I hope you enjoy them, too! ❤️

Emilia Drakon was once the youngest and kindest of the dragon sorcerers, but she’s now the last of her kind. Betrayed and angry, she trades her meekness for a sword and embarks on a quest for vengeance that will lead her straight into the arms of the legendary Captain Maria Welles.

Captain of the famed pirate ship, the Wicked Fate, Maria is every bit as treacherous and bloodthirsty as they say. She has her own vendetta and practically jumps at the chance to trick Emilia into joining her crew.

But when their animosity toward each other blossoms into a passionate romance, the two women will have to decide what they want most. 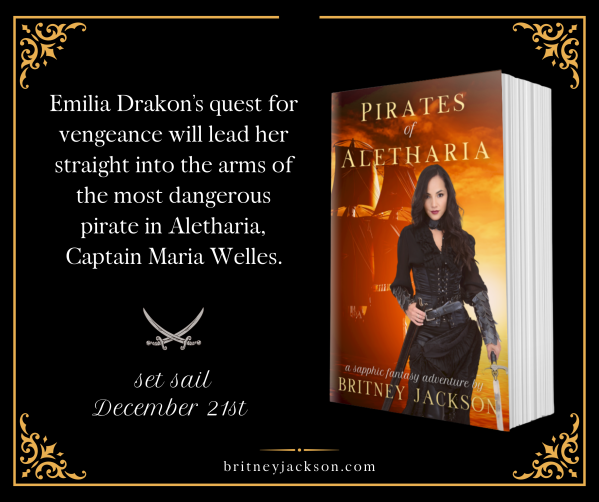 Earlier this week, something went very wonky when I submitted the Pirates of Aletharia manuscript, and Amazon cancelled the preorders (which is just a nightmare, really). But I’m trying to stay optimistic! So, the good news is: it’ll go live as soon as they approve it.

So, it’ll be out, as planned, on the 21st (if not earlier). But it’ll have a new link and no preorder period.

To everyone who preordered, your excitement still means the world to me, whether it worked out or not. 🖤🖤🖤 So, thank you so, so much, and I’ll hope you’ll still be excited when the new link’s up. 🖤🖤🖤 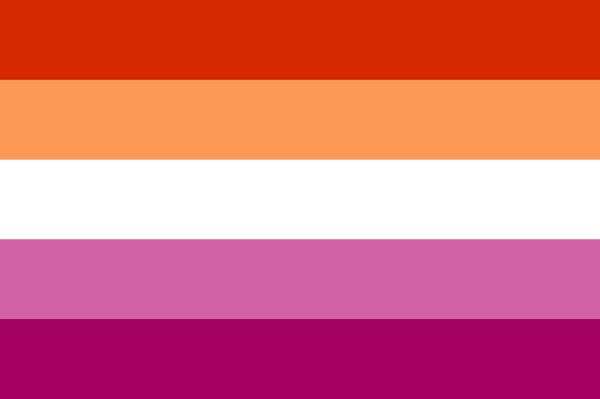 I have cast off my powers of invisibility and am here to save the day!

With a pen, of course. I’m an author. I don’t actually beat up villains or anything. Unfortunately.

I do have a sword, though!

Sending extra love to all of my lesbian readers and friends today! 🧡

Whether you’re out or not, I hope you feel a little less “other” today!

Lesbian is not a dirty word, and you’re perfect as you are! 🏳️‍🌈